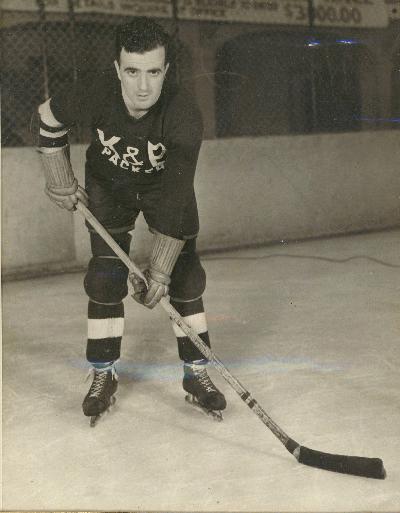 Robert Lawrence “Tic” Williams was called a “natural athlete.”  Born October 17, 1914 in Charlottetown, P.E.I., he performed brilliantly in hockey, baseball and track and field.  In baseball, he hit the long ball and had speed on the base paths.  In track and field, Tic Williams pole vaulted 11 and 12 feet in the late 1930’s, without any training, and ran the 100 yard dash in 10 seconds.  For a number of years, he was top point getter at the Caledonia Games in Cape Breton, but hockey was the game for which most will remember Tic Williams.

Tic first starred with the 1934 Charlottetown Junior Abbies, the Maritime Quebec Junior Champs of that year. He then moved on to the Senior Abbies for the 1936 season. In 1938-39, while with the Sydney Millionaires, Tic set a record with 7 goals and 2 assists in a league game.   The same Millionaires benched him in a game at Halifax in 1940, for scoring too many goals, fearing that winning by a wide margin would bring a small crowd at the next game in Sydney.

While performing in the Nova Scotia A.P.C. League with the Pictou Maripacs, Tic won eight scoring titles, which included seven consecutive titles.  He was an outstanding performer in the Cape Breton League.  He also starred in the Nickel Belt League in northern Ontario and in the U.S. with Denver, Colorado.

Tic Williams performed 10 years in the A.P.C. League and scored 481 league goals. Performing for the Pictou Maripacs, it is said that Tic Williams had the ability to stickhandle behind his back. Tic’s backhand in particular was legendary, and his accuracy was compared by one player to a crack shot at the Bisley rifle meet. Johnny McCready, an N.H.L. player with the Toronto Maple Leafs, commented in a radio interview, “Tic Williams is the greatest player I ever saw.”  This statement may not have been an exaggeration, as it has been reported that the Montreal Canadiens tendered him a contract at one point, but he turned it down in favour of the Atlantic Provinces. The fans in the Pictou County area honoured him in 1953, at Stellarton, with a “Nite,” presenting him with an automobile and many other gifts.  A placard attached to a gleaming 1953 Pontiac Sedan, proudly parked at centre ice, bore the following inscription: “Our Tic Williams, Mr. A.P.C. League, 1942-53”. Tic was obliged to retire at age 40 after suffering a heart attack.

Off the ice, Tic Williams was a quiet, modest man who never made predictions on games or criticized any player.  He was a gentleman sportsman at all times.

Robert “Tic” Williams passed away on March 1, 1960. He was 45 years old. His great contribution to sport was recognized when he was posthumously inducted into the Prince Edward Island Sports Hall of Fame on July 21, 1974.