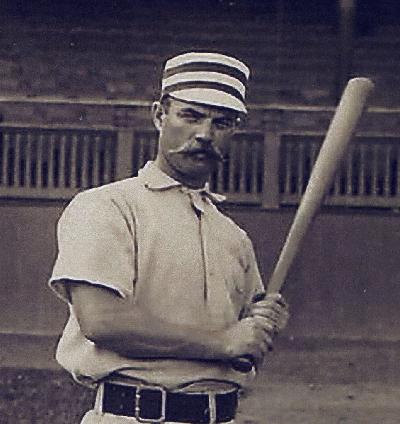 George Albert (Dandy) Wood was the first Major League baseball player from Prince Edward Island, and only the fourth from Canada. He played 1,280 games in the majors during the late 19th century in a career spanning thirteen years, and was the National League Home Run Champion for 1882.

Born November 9, 1858 in or near Pownal, PEI, son of Joseph A. Wood and Mary Ann Jenkins, he was the oldest of three children born on the Island before the family moved to East Boston, MA in 1867.

His Major League career began May 1, 1880 with Worcester when they joined the National League. He played five seasons with Detroit (1881-85), and four with the Philadelphia Phillies (1886-89), before joining the Philadelphia Athletics of the new Players League during the one year players revolt of 1890. He was with the Athletics in the American Association for the 1891 season, and finished his career in the majors with the Baltimore Orioles and Cincinnati Reds, with his final game September 29,1892.

And now for few statistics:
Wood’s first minor pro season was 1878, when he had the second highest batting average in the league while only 19, and he was the league’s leading hitter the following year. Wood was a noted outfielder with a rifle arm, and in 1879 had an authenticated throw of 366 feet.

In 1882, he was the National League Home Run Champion, second in triples in the league, and led Detroit in runs, total bases, triples, home runs, and extra-base hits.

In 1883, he led Detroit in runs, hits, total bases, home runs, runs created, and times on base.

In 1886, he was second in the League in triples. To put things in perspective, from the founding of the Philadelphia Phillies in 1883 to the end of the 2008 season when they won the World Series, 1886 was the best on team record with a 71-43 season. That year, George Wood led the team in hits, total bases, triples, slugging percentage, and extra-base hits, and his batting average was second on the team.

In 1887, he was among the top five in the National League in runs, triples, home runs, and extra base hits. Beginning that year, he also led his League in home runs by a left fielder for five consecutive seasons. That year, he led the second place Phillies in runs, total bases, triples, home runs, slugging percentage and extra-base hits. His 19 triples that year still ranks him fifth all-time with the club.

In 1888, although a left fielder, George was first in pitching saves and second in games finished for the National League. He again led the Phillies in slugging percentage and home runs.

In 1890, and by now the oldest player on the team, he led the Quakers in RBIs, was second in hits and home runs, and was third in runs, triples, batting average and slugging percentage.

In 1891, although player and team captain, he also managed the Philadelphia Athletics of the American Association for 116 games. He finished the season with a managing record of 61 wins and 53 losses.

He ended his baseball career by umpiring 93 professional games.

His career highlights include the following:
In December 1879, he was left fielder on the first team of American professionals to play Cuba’s best in Havana.

On May 7, 1880, in his first week in the majors, he initiated a triple play. And only five weeks later, he was on the winning team in the first perfect game in Major League history.

A player hits for the cycle when he hits a single, a double, a triple, and a home run in the same game. George was only the sixth player in the majors to accomplish this feat.

In 1887, Philadelphia opened their new ballpark, the Baker Bowl, which was to be their home for more than 50 years. Wood hit the first official home run in the park in his first at-bat on opening day. Also that year, he was the first Phillies player to get ten or more doubles, triples, home runs and stolen bases in a single season.

In the winter of 1888-89, George was a member of the first professional baseball team to tour the world. He was selected to be a part of the All-America team which played 55 games against Al Spalding’s Chicago Club. The group included five future hall of famers. They played in Hawaii, New Zealand, Australia, Ceylon, Egypt, Italy, France, England, and Ireland, before arriving back in New York in April 1889 to a hero’s welcome after nearly five months of travel. They had played before royalty and in the shadow of the pyramids, and were invited to the White House to meet the president.

Although primarily a left fielder, at one time or another he played every position but catcher during his 13 years of major league baseball, including 5 games as pitcher. He died in Harrisburg, PA April 4, 1924 at age 65, and was buried in Union Cemetery, Franklin, MA.

George was inducted into the Canadian Baseball Hall of Fame June 18, 2011.