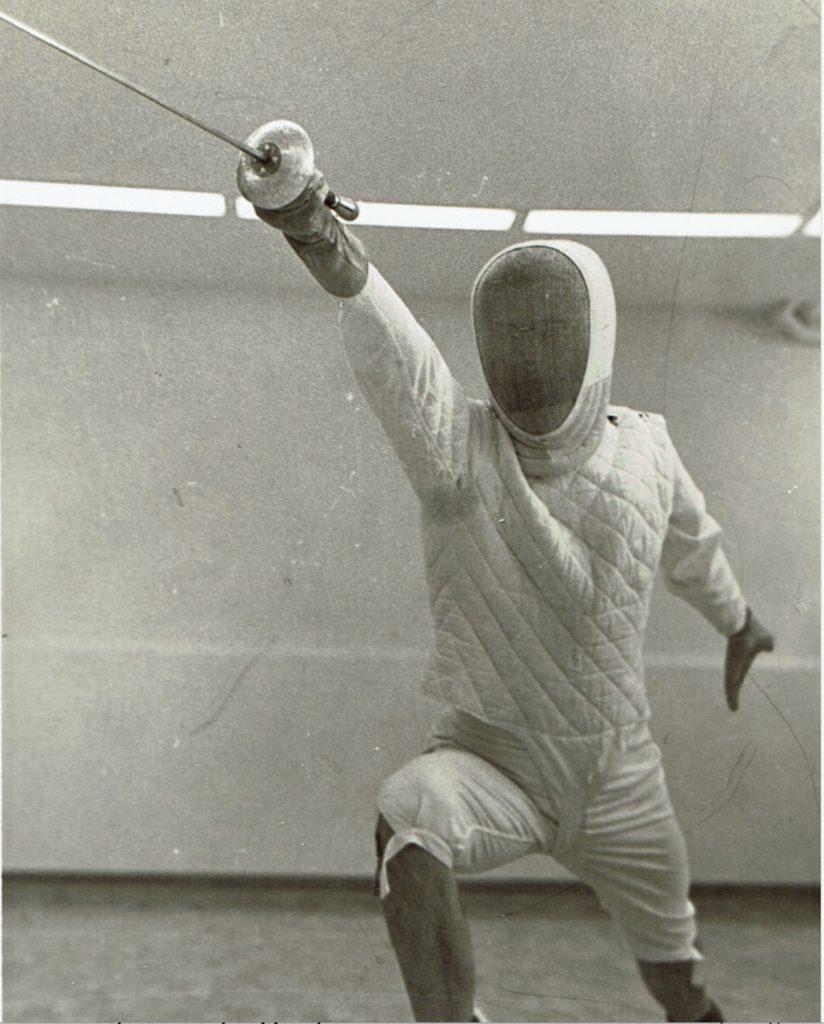 Good Evening honourable and special guests, members of the board of directors, members of this Hall who may be present here this evening, 2018 inductees and ladies and gentlemen.

I feel particularly honoured to have been asked to present to all of you here present, Lothar Zimmermann, as one of this year’s inductees.

Yes, his first name is Lothar, not Luther, Lowther or Lother, but, as he says, “low tar” like in the cigarette ads from years ago.

I first met Lothar when he was dating my sister, Sharon, now his wife of over 30 years. At the time, I was quite concerned for her and for her reputation when I heard rumours to the effect that Lothar was quite a “swordsman”. I felt comforted when I found out that people were actually referring to such things as “sabre”, “epée” and “foil”. To my quickly earned embarrassment, I realized I had no longer any need to be “en garde” for my sister.

Lothar Zimmermann is a very quiet, unassuming and humble man and always polite and respectful to anyone in his presence. In no way would Lothar ever boast of his accomplishments. He tells me that he feels somewhat embarrassed by his induction and that he believes that after 50 continuous years devoted to the sport of fencing in PEI alone, he should be an artifact in the museum section of this august Hall, rather than an inductee enshrined on its wall.

He is wrong, of course.

Professor Lothar Zimmermann, scholar, historian, educator, teacher, coach, trainer, administrator, leader and the founder of the sport of fencing in Prince Edward Island. He is, tonight, being inducted into the Prince Edward Island Sports Hall of Fame, in the Builders Category, for his dedication, commitment and passion for his sport.

He is indeed deserving.

Lothar emigrated to Canada with his mother and his two brothers in May of 1955. Lothar was 14 years old. He was born in the City of Hannover in the northwest region of Germany during the 2nd World War. Lothar’s father, Franz, had served in the German Navy and wanted a new life for his family. Franz had arrived in Hamilton, Ontario two years prior to Lothar arriving with his mom and his two brothers. His dad is now deceased but his mom, Ursula, is a proud 100 years old and still living in the family home in Hamilton.

It was in Hamilton at MacMaster University where Lothar’s passion for fencing began, and it continued to grow through his post graduate studies at the University of Toronto. His arrival in Prince Edward Island was to take a position as Professor of German at Prince of Wales College in 1967 and he moved on to the Department of Modern Languages at UPEI in 1969, when Prince of Wales College and St. Dunstan’s University were merged. He retired from UPEI in 2006 but was recruited for an additional year as a sessional lecturer.

Lothar Zimmermann introduced the sport of fencing to Prince Edward Island while in his first year of teaching at Prince of Wales College and continued to build participation opportunities for interested Islanders through the clubs he established there and, particularly, at UPEI. Subsequently, he formed the PEI Fencing Association in order to align itself with the Canadian Fencing Association, to secure the needed formal recognition of PEI’s participating athletes as well as resources and opportunities for them and the Association beyond the experience of recreational fencers.

Lothar is a true gentleman and his insistence on a commitment to fair play in sports and his imprinting on his fencers and colleagues the sense of honour and dignity in competition, has made him a role model, not only for fencers, but for all of those who have recognized in him a devotee of the importance of amateur sport and of its real potential to build good character in all persons who seize the opportunity to become involved. He has insured that such opportunity has been and will continue to be there for those who, in the future, participate in this sport of fencing, which he so dearly loves.

Many of you have seen the recent articles in our news media and online and are aware of his exemplary dedication to fencing as a volunteer for over 50 years in this Province.

He is not an artifact. He is a person of history.

This history of the sport of fencing unfolds in Prince Edward Island like a “feel good” movie. It begins on the corner of a small office desk, moves to a closet of equipment storage and basement sword play, to gymnasia and ultimately to the combat arenas of national and international competition. This movie evidences a singular dedication that has inspired many to go on to become coaches throughout our nation and internationally and to compete at competitions in Canada and elsewhere. It highlights a Canada Games medal winner, an under 15 national champion, a two time Olympian in the sport of modern pentathlon, of which fencing is one of the disciplines, and moves forward to a young woman achieving the designation of international fencing master, the very highest level of international coaching certification in this sport.

This movie is a true story.
This movie is created, produced, written, directed by and stars, Lothar Zimmermann. He is Clint Eastwood with a foil.

The achievements by members of the fencing clubs and associations here in Prince Edward Island are, in his view, award enough for him. Others see it differently. Previously in 2005 he was awarded the Sport PEI President’s Award and he is most deserving of this Hall’s prestigious recognition and induction as well.

I believe it is valuable on an occasion such as this for you to have a little more insight into the person who is being inducted into this Hall. In Lothar’s case, it’s important to know that

Lothar’s character and dedicated commitment extends beyond the sport of fencing and, like many people, is first and foremost to his family. He has just returned home, about 10 days ago, from a visit with his mom and one of his brothers in Hamilton.

It should be noted that Lothar’s dedication has, for many years now, been extended to the role of curator and librarian for the German-Canadian Historical Association. I have always teased Lothar that curator is just a sophisticated synonym for a “pack rat”. But, in saying that, it is true that Lothar and Sharon’s motor vehicles have been banished to the weather elements so that he could convert his garage into an ever expanding and properly catalogued library. There is paper everywhere. Lothar has been continually busy with German- Canadian studies and has published in that field. He is presently the President of that Association. He has inherited the German-Canadian archives, that had been housed at the University of Toronto, when one of the retiring professors delivered 100 boxes of material into Lothar’s hands. These documents are still being catalogued by him and Lothar hopes that one day these “treasurers” will find a home at either the University of Winnipeg, where there is a chair in German-Canadian studies, or in Kitchener/Waterloo at the Centre for German studies at the University of Waterloo. Lothar continues to be the editor of an international quarterly journal, of current happenings and publications, that gathers together items of interest to the German-Canadian Historical Association. So he remains busy and ever foresightful of the needs of others of similar passion.

Lothar’s sense of humour characterizes his teaching manner, which immediately allows the novice to connect and the skilled to accept. I have read the letters filed in support of Lothar’s nomination and they are filled with such words as honour, respect, humble, character, leader, humour, mentor…but none mentioned “wine”, not “whine” with an “h”, but the beverage. German wines bring forth another of Lothar’s passionate loves; that of the German grapes. Their absence from a restaurant wine list brings out worded emotions that a 10 year old fencer from PEI has never heard uttered by him. I couldn’t resist mentioning that, as I thought it should be known, that, despite the glowing kudos you have read, heard in interview or concluded from my remarks, you are not inducting St. Lothar tonight. Even great men nod occasionally.

Lothar will quietly abuse me if I take up any more of everyone’s time tonight waxing on and polishing Lothar’s citation. So I will conclude.

It’s been a privilege and a pleasure to have been a part of this evening in the Hall and to present to you Professor Lothar Zimmermann as an inductee into the Prince Edward Island Sports Hall of Fame.

Presented and read on the evening by Paul Mullin. 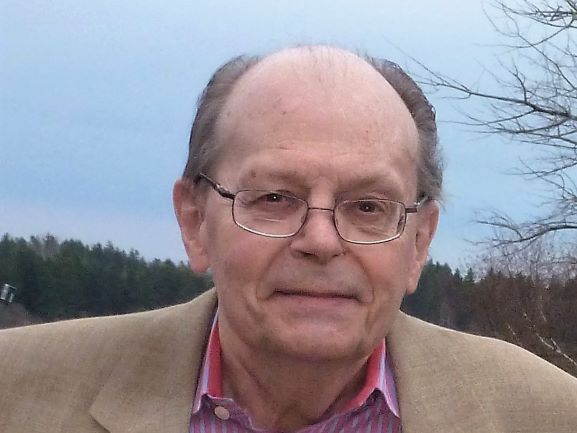